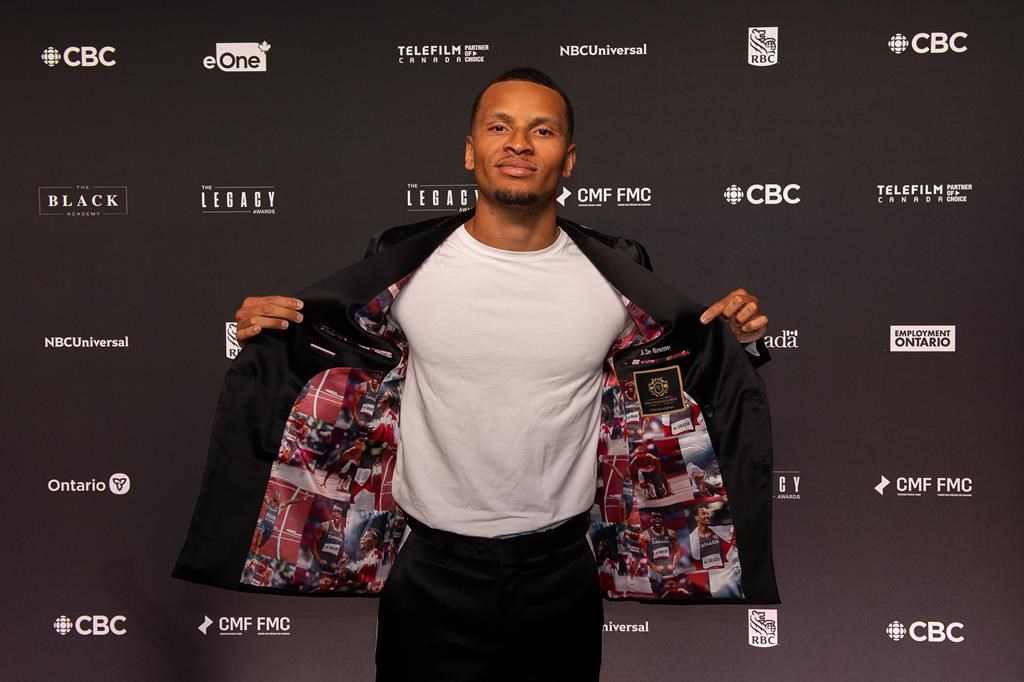 Actors Shamier Anderson and Stephan James, brothers from Toronto’s Scarborough neighbourhood, founded The Legacy Awards in order to spotlight exceptional Black Canadians with a platform they felt was lacking.

“This whole idea began when Shamier and I would go to all these award shows and see little to no people of colour,” said James, who kept the night of accolades and performances flowing alongside Anderson. “So we decided that things need to change.”

Each award recipient was chosen by an advisory committee made up of experts across music, film, TV and pop culture, in addition to The Black Academy. The only exception was the digital creator fan choice award voted on by the public.

De Grasse, asix-time Olympic medallist, was honoured as Athlete of the Year for his “exemplary accomplishments in sport in Canada and the world along with his contribution to the Black Canadian Identity.”

De Grasse gracefully accepted the honour at Toronto’s History venue where the CBC broadcast was held, thanking his family.

“You guys keep me grounded and encourage me to be the best version of myself,” he said.

De Grasse took home medals in all three sprinting events at the 2016 Rio Olympics and later at the Tokyo 2020 Summer Olympics.

He also founded the Andre De Grasse Family Foundation in 2018 to inspire and empower youth through access to sport, education, and health care.

Joining the recipient lineup was Grey, a Toronto-based sports broadcaster and producer who became the first Black woman to host a flagship sports show with SportsCentre.

For her “unmistakable talent and activism,” she was honoured with the first ever Jahmil French Award award — named after the late-Canadian actor of the same name for his role in “Degrassi: The Next generation” — given to a “rising star” within the Canadian media landscape.

“Look at our beauty, our strength. What resides between these walls, and if that energy could talk, what would it say? How we move individually, collectively — which leads me to ask, what the heck they’re so afraid of?” said Grey through tears as she accepted her award.

Grey asked that her award presenters, journalists Brandon Gonez and Kathleen Newman-Bremang join her by her side.

“To everyone in this room, I love you guys so much,” said Grey to an audience filled with still onlookers. “And thank you for loving me right back.

Meanwhile, film festival founder, actor and Haitian-Canadian director Colas was honoured with the Visionnaire Award for supporting diversity on and off the screen through organizations including the Fabienne Colas Foundation.

Colas thanked former governor general Michaëlle Jean, who was on stage to present her with the Legacy’s visionary award, citing the importance of having a Black mentor in such a prominent position.

“You led me and so many women of colour to dream a bigger dream for themselves,” said Colas, noting she moved to Canada from Haiti in 2003, two years before Jean became Canada’s first Black governor general.

Colas stressed the lack in inclusivity in Canadian media. At one point during her acceptance speech, she gave the analogy of a photo being taken of the entire room, reminding the audience that when the photo is presented on the 11 o’clock news, some individuals may suddenly notice they’re missing from the photo.

“Well, that is exactly what’s happening everywhere in Canada, every day, to a part of the population. They are part of our society, but they are not included, they are excluded from what should be the mirror of society, which is television and cinema.”

She said change could happen through massive inclusion and the support of Black-led and BIPOC organizations and festivals.

Apart from the awards receivers themselves, the evening was decorated with rousing live performances by a manifold of Canada’s most prominent Black music artists such as Kardinal Offishall, Deborah Cox, Fefe Dobson, Alicia Mighty and Melanie Fiona among others.