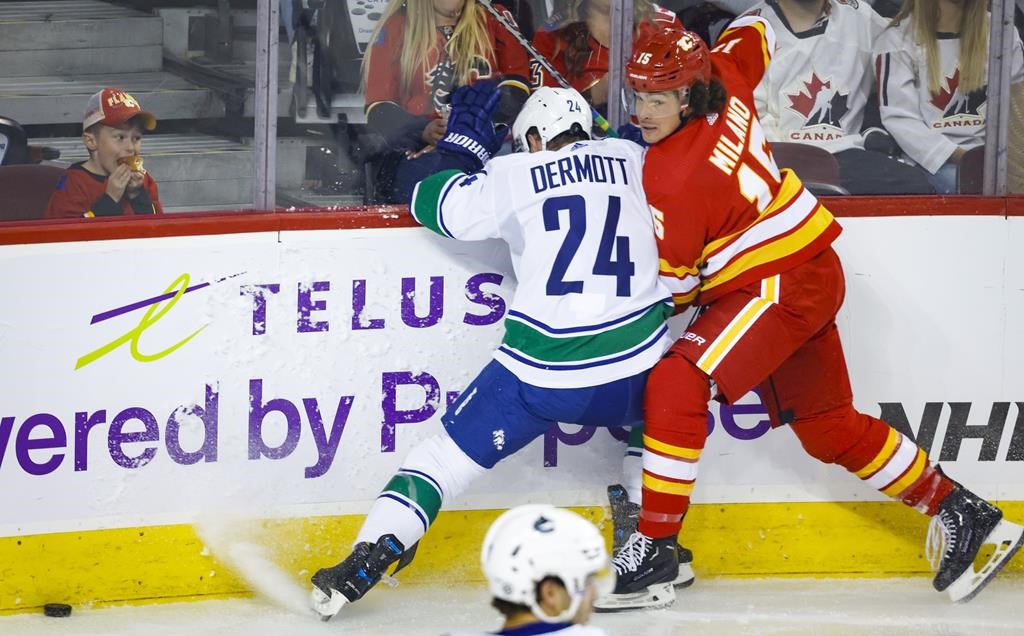 CALGARY – Jonathan Huberdeau scored in his Flames debut as Calgary scored three times in the second period in a 4-0 NHL pre-season victory over the Vancouver Canucks split-squad.

Cody Eakin, Blake Coleman and journeyman forward Brett Sutter, Darryl Sutter’s son, also scored for Calgary. The Flames iced a far more experienced lineup than Vancouver, who kept all of its top players back home for the other half of two split-squad games. The Flames also prevailed in Vancouver, winning 3-2 in overtime.

Huberdeau was the centrepiece addition in a busy off-season for general manager Brad Treliving, who acquired the 29-year-old from Florida in a blockbuster trade that also included defenceman MacKenzie Weegar. Matthew Tkachuk went to the Panthers. The trade came nine days after star left-winger Johnny Gaudreau left Calgary to sign as a free agent with Columbus.

Two weeks after the trade, Huberdeau agreed to an eight-year contract extension that will make him Calgary’s highest paid player at $10.5 million starting in 2023-24. Huberdeau finished tied with Gaudreau for second in league scoring last year with 115 points.

The two high-profile departures means a new No. 1 line for Calgary and as they’ve been practising since training camp began, the new top trio made its debut with Elias Lindholm between Huberdeau and Tyler Toffoli.

Also playing together on the top power play unit, it was a five-on-three that produced the game’s opening goal 2:11 into the second period.

Huberdeau got the puck at the top of the crease and after his attempt to set up Toffoli at the side of the net didn’t get through, the puck bounced right back to him and he slid it past Collin Delia as the Saddledome crowd erupted.

With an excess of veterans up front, there isn’t expected to be much room but two guys in camp on a professional tryout are Sonny Milano and Eakin. Milano, 26, coming off a career-high 16 goals with Anaheim last season, is auditioning for the one opening in Calgary’s top nine while Eakin, a veteran of 700 NHL games, would be looking to catch on in a depth role.

Milano flashed his offensive skill set in one rush dipsy-doodled past John Stevens, then sent a dangerous backhander on net that Delia had to block. Milano drew a penalty in the process.

With Jacob Markstrom not in uniform, backup Dan Vladar got the start and was sharp in turning aside all 15 shots he faced in his two periods, before giving way to Oscar Dansk, who made four stops in the third.

Vladar’s body of work included a sharp glove stop off Arshdeep Bains on a second-period breakaway.

Delia also played 40 minutes, finishing with 21 saves. Michael DiPietro stopped nine of the 10 shots he faced in the third.

Notable scratches for the Flames included defenceman Chris Tanev and prominent free agent centre Nazem Kadri. Both players have been full participants in practice, but with Tanev coming back from off-season shoulder surgery and Kadri having played deep into the spring with the Stanley Cup-winning Colorado Avalanche, coach Darryl Sutter has acknowledged that neither are expected to appear in any games in the early part of the pre-season.

NOTES: LW Andrew Mangiapane, coming off a career-high 35 goals, is not yet practising with the Flames as he recovers from a minor injury. Also absent from the team as he attends to a family matter is defenceman Oliver Kylington.