Outbreak: Shades of Horror, an online co-op next-gen exclusive survival horror nightmare, has been announced for Xbox Series X|S! Return to 2000s-era survival horror as you fight your way through the opening hours of an undead outbreak in a major metropolitan city. Featuring bleeding edge graphics and physics, alongside the classic survival horror gameplay you’ve come to expect in the Outbreak series, this is a new nightmare you’ll need to see to believe. And to make it even better, we have a single-player atmospheric playable demo available now on Xbox Series X|S so you can start getting yourself acquainted with the sights and sounds of Cypress Ridge!

Welcome to the Modern Age of Survival horror

If you’re familiar with the Outbreak series, you know we’ve been working hard to bring back retro survival horror. From 2D, to fixed camera, over-the-shoulder, and eventually first-person shooters, we’ve explored many different eras of the genre since the first Outbreak launched in 2017.

But now, it’s time to fully embrace the future with a next-gen exclusive title. Built from the ground up on the latest graphics technologies, Outbreak: Shades of Horror wants to meld a modern interpretation of survival horror gameplay with cutting edge graphics and cinematic experiences. We want you to feel like you’re trapped in this undead apocalypse, and that includes making the sights, sounds, and scenarios more realistic. And best of all, this is the first Outbreak title on consoles to offer online four-player co-op. But if you have a friend at home, you’ll also have options for four-player splitscreen co-op!

Outbreak: Shades of Horror is our most ambitious and expansive title ever. And we can’t build it without the fans. It’s the first time that we’re attempting to crowd-fund a large budget for one of our games, and we want you to be involved with the development and execution of the next generation of survival horror!

The Story So Far…

Outbreak: Shades of Horror takes place in the major metropolitan city of Cypress Ridge, with a population of nearly one million souls, it’s a hustling and bustling urban environment. As the infection tears through the city, you’ll find yourself in the boots of everyday survivors, just trying to find a way to escape. You’re not here to solve a mystery behind the undead epidemic, or find some great cure, you’re only mission is to survive and not join the throngs of the undead.

As you and your fellow compatriots fight your way through the city, you’ll need to scrounge for resources and use everything you can find to defend yourselves. Make sure to explore thoroughly as you try to solve environmental puzzles to open a new path or stop the impending hordes from chasing you. You may also find notes left behind by other survivors and residents of the city, with clues about the apocalypse, and maybe even a helpful hint or a password.

This cinematic nightmare brings the undead threat to life, and you’ll be lucky to emerge in one piece.

We’re Leaving the Janky Controls Behind…

One of the biggest changes you’ll experience in Outbreak: Shades of Horror is the modern controls at your disposal. You’ll be fighting to survive with your choice of first-person shooter, third-person over-the-shoulder shooter, or retro fixed camera angles gameplay. This isn’t some nightmare where you need to stand still as you fight to defend yourself, we’re bringing modern precision aiming and all the bells and whistles you expect in a modern action-adventure title, and marrying it with the classic survival horror gameplay motifs you miss from the ‘90s and early 2000s. We want this nightmare to be approachable, and we want everyone to have a great time while they’re running for their lives!

Your Ticket to Visit Cypress Ridge…

Talk is cheap. We didn’t want to show up, hype up the game, and then leave you with nothing to get your hands dirty. That’s why the Outbreak: Shades of Horror playable Demo is available now on Xbox Series X|S. This limited atmospheric teaser puts you into the shoes of one survivor in the first-person shooter view mode. After awaking from a gruesome accident, you find yourself trapped in the city center. You’ll need to explore thoroughly, find supplies and weapons, and determine how you’ll escape.

There are eight possible endings to this demo, and it’s designed to offer you the freedom of exploration to approach, and solve this mystery, in the way you choose. But you won’t live forever, as your virus gauge fills, you’ll find yourself inching ever closer to joining the undead hordes. And if you’re not careful, a poorly timed gunshot or explosion may inflict a life-threatening wound, then it’s all over.

We hope you enjoy this brief trip to Cypress Ridge and we’re so excited to show you more in our Kickstarter campaign starting August 31st!

On August 31st, 2022, we’re going to launch a Kickstarter to help drive funding to bring this title to life. Make sure to take some time to swing by and follow the campaign. You’ll have the opportunity to grab the title at a great discount, pick up physical merch, and even get your hands dirty with the development of enemies, items, weapons and more in the full game if you so choose! We want Outbreak: Shades of Horror to be built by survival horror fans, for survival horror fans, and we’re so excited to work with the community on this ambitious project! Thank you and stay tuned! 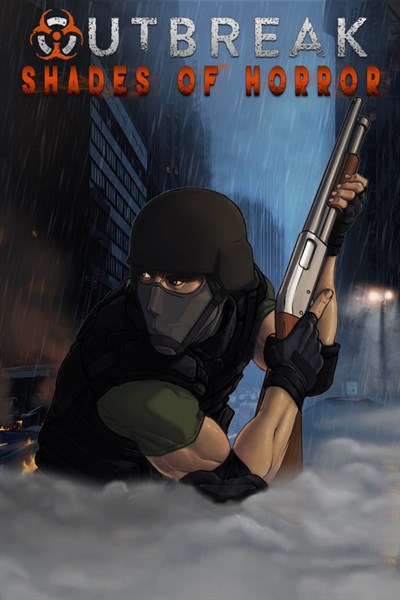 ☆☆☆☆☆
4
★★★★★
After surviving a gruesome accident, you awake in a city overrun with the undead. Find a way to escape before the infection consumes you in this next generation survival horror experience.

The Outbreak: Shades of Horror Playable Teaser is designed to be an atmospheric demonstration of the tone and story of a single survivor. This demo is only playable in first person view, but the full release will feature a large cast of survivors, and your choice of playing in retro fixed camera, over-the-shoulder or first person shooter view alone or with up to three friends as you try to escape from the city.