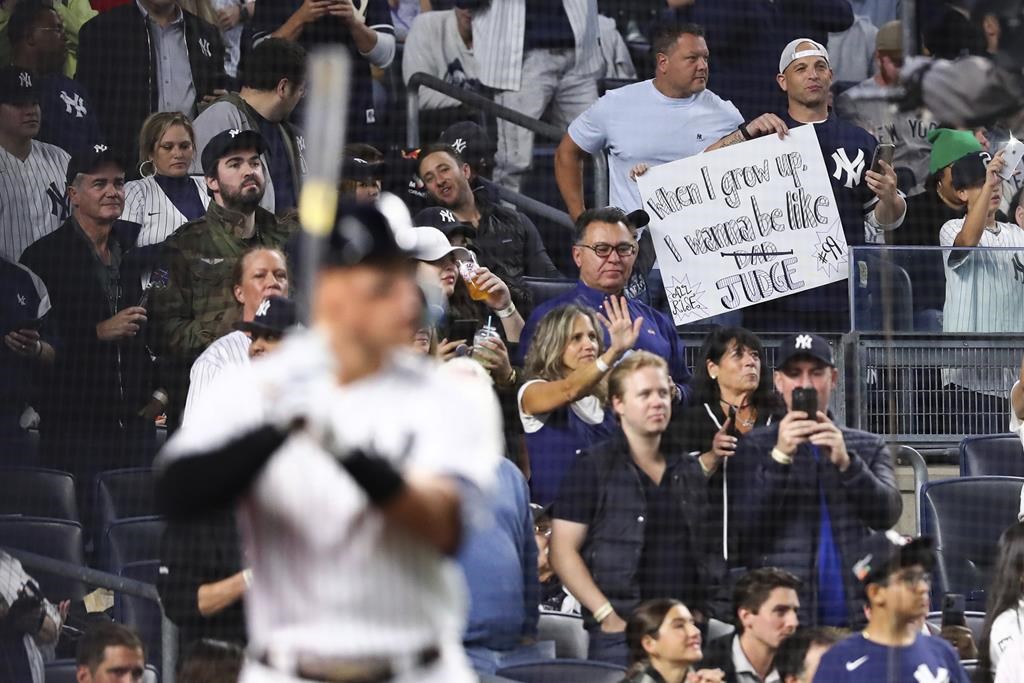 NEW YORK (AP) — Aaron Judge was due up next for the New York Yankees when their game Sunday night against the Boston Red Sox went into a long rain delay after six innings.

With the star slugger still at 60 home runs, one short of Roger Maris’ American League record for a season, fans at Yankee Stadium were left with a difficult decision: wait out a big storm holding out hope of seeing a historic moment, or head home before the hour got too late.

Many in the sellout crowd of 46,707 stuck around, leaving their seats for dry cover on concourses and under overhangs. Some booed when umpires called for the tarp at 9:15 p.m., but torrential rain was soon pouring in the ballpark. Loud thunder and lightning flashes accompanied a heavy storm that could last past 11 p.m. and possibly midnight, according to the forecast.

“We’re not leaving,” said Joe G., who declined to give his last name, after making the trip from Pennsylvania and getting the tickets last month for his first game since the COVID-19 pandemic began as a 30th birthday gift.

Judge was 1 for 2 with a double and a walk when play was stopped with the AL East-leading Yankees ahead of the last-place Red Sox 2-0.

The game marked his final chance to catch Maris on New York’s current homestand — the Yankees play a three-game series in Toronto beginning Monday night, then return home for three games against Baltimore next weekend before wrapping up the regular season at Texas.

Cassidy bought tickets as a birthday gift for his father in mid-August and they lucked into a chance to see Judge chase Maris’ home run record in person.

“I want to see two — one to tie and one to break,” said Cassidy’s father, Patrick, as they grabbed cover on a concourse between the second and third decks on the third base side.

Judge had gone four games without a home run. Since connecting for No. 60 on Tuesday night against Pittsburgh to spark a ninth-inning comeback in the first game of the homestand, the four-time All-Star was 4 for 15 with three doubles, six walks and six strikeouts.

The closest he’d come to matching Maris’ 1961 mark was a 404-foot drive caught right in front of the center field fence Thursday.

Judge led off the bottom of the first by grounding a double inside third base against Red Sox rookie Brayan Bello. The slugger fought back from an 0-2 count to draw a walk in the third and was visibly disappointed when he flied out to center field on a hanging slider in the fifth.

Moments before play was halted, Boston right fielder Rob Refsnyder dropped a two-out fly ball as he looked up into the raindrops. The error allowed Aaron Hicks to score from first base, making it 2-0.

Bello then threw a called third strike past Oswald Peraza, ending the sixth inning with Judge on deck.

With the rain intensifying, fans pulled on ponchos and opened umbrellas in the stands. Two umpires huddled with a member of the Yankee Stadium grounds crew in foul territory, and the tarp was rolled onto the infield.

Amanda Peso, from nearby Westchester, bought tickets Thursday and said she and friend Jennifer Lamond, a Red Sox fan from Manhattan, would wait hours for the game to resume.

“I wanted to wait this out because you never know if Aaron’s going to do it tonight,” Peso said. “So I’m here to support him. I’m a Yankee fan, period. Regardless of this history thing wasn’t about to happen, I would be here and wait it out likely anyway, because I took tomorrow off for this reason.”