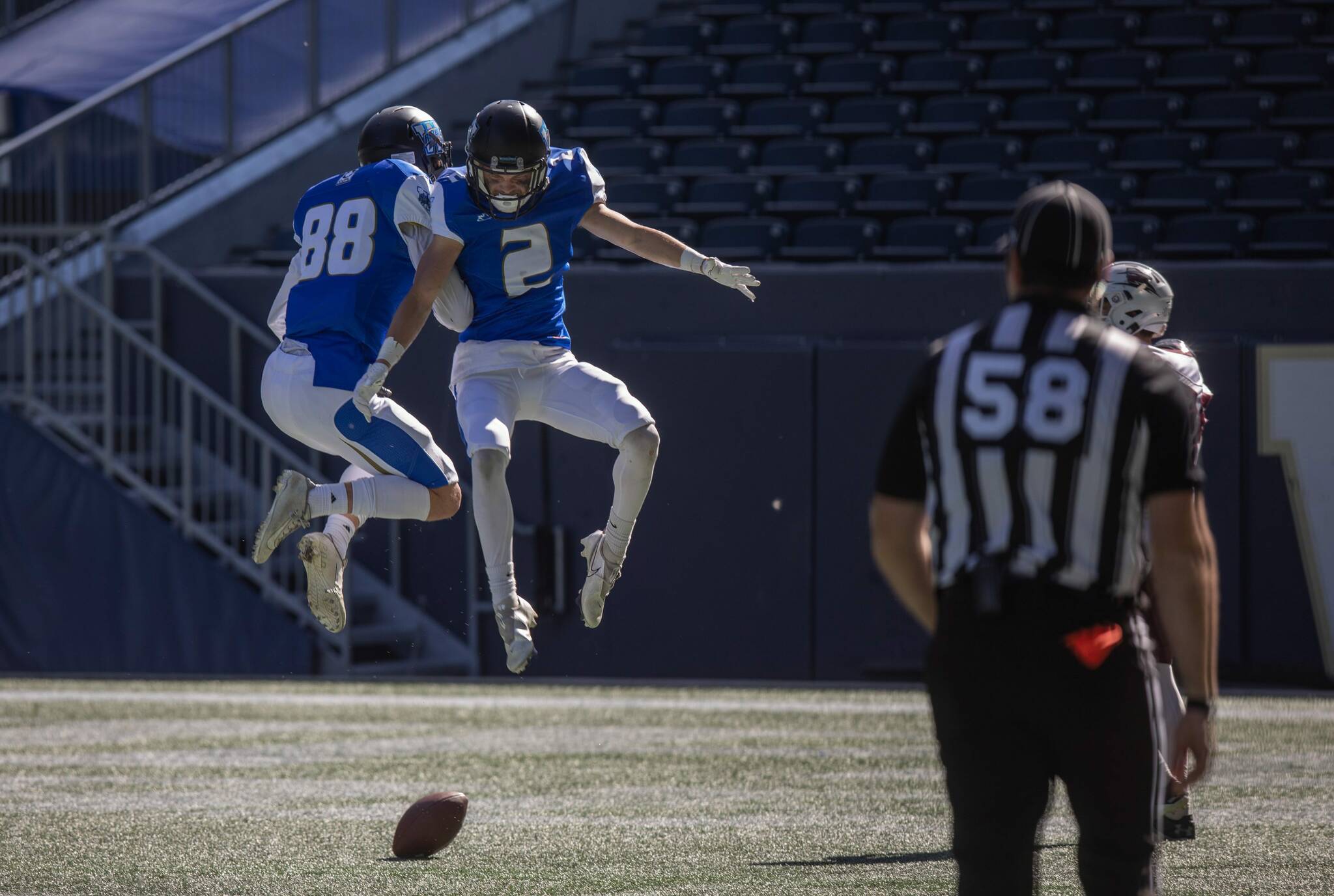 The No. 5 Winnipeg Rifles got off to a strong start against the No. 3 Regina Thunder, only to come out shooting blanks in the second half en route to a 29-23 loss at IG Field Sunday afternoon.

The loss dropped the Rifles to 3-3 and snapped a three-game winning streak after opening the season 0-2. The Thunder continue to roll, the victory improving their perfect regular-season mark to 6-0.

“When we play our best game, other teams can’t play with us. The only ones that beat us, typically, is ourselves, and we beat ourselves a bit today,” said Rifles head coach Geordie Wilson. “But it’s not the end of the world. It wasn’t a playoff game. We get to live another day and keep moving forward.”

The Rifles built up a 15-0 lead through the first quarter, the result of a pair of touchdown drives, along with a conceded single point off the opening kickoff.

Winnipeg quarterback Bryson McNeil connected with receiver Eric Adams for a 42-yard touchdown to make it an 8-0 game. Adams led all receivers with five receptions for 88 yards and the score.

McNeil would then find receiver Everett Findley in the end zone for a 13-yard strike, increasing Winnipeg’s lead to 15-0. The touchdown was set up by an interception from Rifles defensive back Josh Yanchishyn, who returned the ball to the Thunder’s 23-yard line.

The Thunder cut into the Rifles lead in the second quarter, orchestrating a long touchdown drive that started on their own 15 and ended with a two-yard rushing score from running back Ryland Leichert.

Each team earned a single point late in the second quarter, with the Rifles taking a 16-9 lead into halftime.

“We’ve had this the last few weeks — well, actually last week we started a little slow — but normally we’ve been pretty fast out of the gate, and what’s happened is we just haven’t been able to sustain it,” said Wilson. “The second half we dropped some balls that we don’t normally drop, and the thing is, when you’re playing three-down football, you got to convert when you get chances and you can’t make mistakes like that.”

It would be all Thunder in the second half, with Regina evening the score, 16-16, on their second series of the third quarter. After moving the ball to midfield, quarterback Carter Shewchuk hit Isaiah Woodley on a cross route, sending Woodley 52 yards for the touchdown.

A 26-yard field goal on Regina’s next drive would give the Thunder their first lead of the game, 19-16, and one they wouldn’t relinquish. The field goal was aided by a 25-yard objectionable conduct penalty assessed to Rifles defensive lineman Spenser Pilon, who was also ejected from the game.

Some more undisciplined play put the Rifles in a deeper hole. With the Thunder field-goal unit out for a 29-yard kick, an offside called on the Rifles would give Regina a new set of downs inside Winnipeg’s 25.

Two plays later, Shewchuk connected with Isaac Foord for a four-yard touchdown and a 26-16 lead. A fumble recovery for the Thunder led to another field goal, this one from 30 yards, win fewer than three minutes remaining.

The Rifles added a touchdown with 32 seconds left in the fourth quarter. McNeil, who finished 26-for-40 passing for 290 yards, two touchdowns and one interception, found receiver Luke McMillan, who made a nice diving catch for a 20-yard score.

The comeback stalled after Regina recovered the onside kick attempt.

“We’ve been getting better as the year goes on because we’ve been correcting mistakes and getting better from learning from it. We’re young, and as a result of it sometimes we have to learn in these moments,” said Wilson. “The big thing is just to get better. We’re trending towards being a good team. I want to be a good team by the end of the regular season and then hopefully we become a great team when it’s all for real and we get to playoffs. We’re working at it.”

The Rifles will now get ready to head to Edmonton to take on the Huskies (4-2), for a chance to take over second place in the Prairie Conference.

After a slew of injuries playing hockey that included breaks to the wrist, arm, and collar bone; a tear of the medial collateral ligament in both knees; as well as a collapsed lung, Jeff figured it was a good idea to take his interest in sports off the ice and in to the classroom.