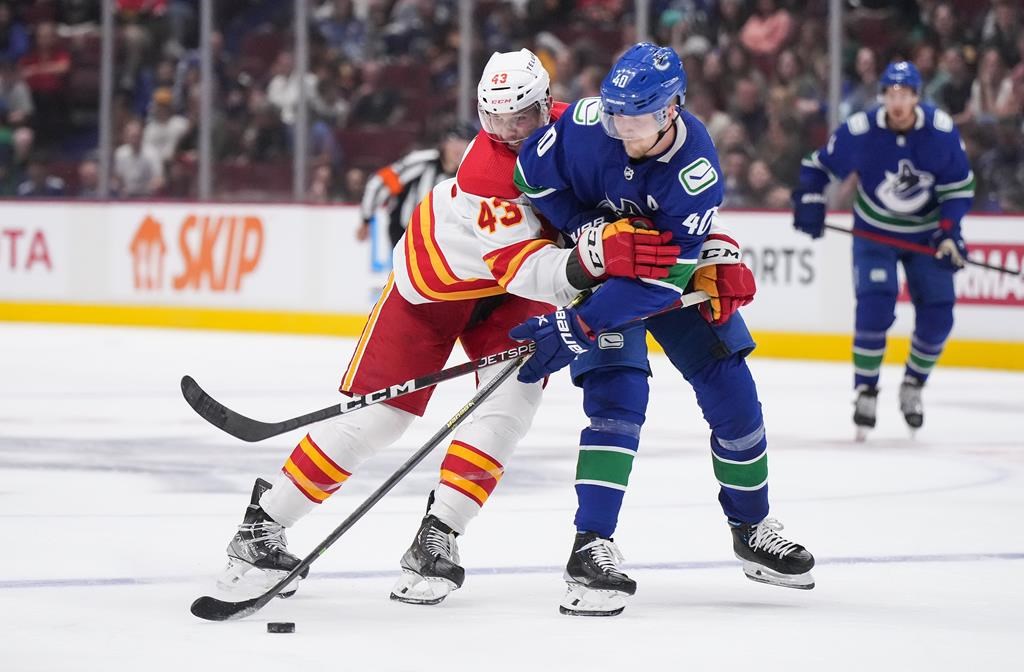 VANCOUVER – Michael Stone scored 3:39 into overtime and the Calgary Flames opened the NHL pre-season with a 3-2 victory over the Vancouver Canucks in a split-squad game on Sunday.

Ben Jones and Mitch McLain each had a goal and an assist for the Flames in regulation.

Both of Vancouver’s goals came in the third period, with Vasily Podkolzin and Conor Garland finding the back of the net.

Spencer Martin stopped 11-of-13 shots for the Canucks before being replaced by Arturs Silovs to start the third period. Silovs made 28 saves.

The Flames and Canucks also faced off in a split-squad matchup in Calgary on Sunday, with Jonathan Huberdeau and MacKenzie Weegar donning Flames jerseys in game action for the first time.

Calgary got an extra man for the final 98 seconds of regulation after Podkolzin was called for tripping Nick DeSimone.

The Flames were quick to use the advantage, with Stone sending a sharp-angle shot past Silovs to clinch the win with 1:21 left on the clock.

The Canucks levelled the score with 91 seconds left in the game after pulling Silovs in favour of an extra attacker.

Elias Pettersson placed a pass on Garland’s tape and, stationed at the side of the crease, the winder blasted a shot at Wolf.

The goalie stopped the initial attempt but Garland unleashed another rocket, this time sending a puck over Wolf’s shoulder to make it 2-2.

Vancouver finally got a shot past Wolf 8:07 into the third.

Podkolzin collected a pass from Tyler Myers and bulldozed his way to the front of the net, then muscled a shot past Wolf cutting the Canucks’ deficit to 2-1.

The duo exchanged pleasantries then dropped the gloves at centre ice. Each player got in some heavy blows before they were separated by officials. Each was handed a five-minute major for fighting.

The Canucks opted to swap goalies to start the third, replacing Martins with Silovs.

The Latvian netminder was forced to make a big stop 36 seconds into the period, diving backwards to sweep a shot by Stone out of the crease.

Calgary took a 2-0 lead into the second intermission thanks to a well-used rebound.

Martin made a pad stop on McLain’s sharp-angle shot but the puck popped out to Jones, who sent a shot in off the goalie’s right skate at the 18:41 mark.

Jones, 23, made his NHL debut for Vegas last season. He appeared in two games for the Golden Knights before signing with the Flames as a free agent in July.

Vancouver spent seven minutes short-handed in the second, including a four-minute stretch midway through the period after Arseneau cross-checked Milan Lucic, then tried to drop the gloves with the Flames bruiser.

Arseneau was handed a double minor, which his teammates managed to kill off.

Calgary went 0-for-7 on the power play Sunday while Vancouver was 0-for-7.

The Canucks lost a potent piece of their offence early in the second when Calgary’s Nicolas Meloche sent winger Ilya Mikheyev into the sideboards about three minutes into the frame.

The Russian winger went directly to the dressing room and did not return to the game.

After spending two minutes in the box for high-sticking, McLain opened the scoring for Calgary 12:40 into the first period.

The 29-year-old centre streaked down the ice and deftly moved the puck from his forehand to his backhand before flipping a puck in past Martin from in tight.

McLain spent most of last season playing for the Milwaukee Admirals of the American Hockey League.

Calgary will continue pre-season play Tuesday when it hosts Seattle. The Kraken will face the Canucks in Vancouver on Thursday.